A guide to Digestive Health & Wellbeing

Posted on 28th November 2021 at 19:48
The condition and function of our gastrointestinal tract (GIT) is essential to our well-being.
The GIT harbours a rich flora of more than 400 different bacterial species. Billions of these friendly bacteria build colonies in the small and large intestines and constitute the first line of defence against illness and disease. The health and survival of these friendly bacteria depends upon lifestyle and dietary factors.
The Gastrointestinal Tract
Intestinal Flora
Functions of Healthy Intestinal Flora
The factors that can alter the intestinal flora and cause dysbiosis
Healing options
Probiotic supplement versus commercialised yoghurt
Changes in food habits during the past 100 years

The GIT is self-running and self-healing. It is one of the largest interfaces between the outside world and the human internal environment. The nine-metre tract constitutes the body’s second largest surface area, estimated to cover approximately 250-400m2 which is comparable to the size of a tennis court. During a normal lifetime, 60 tonnes of food passes through this canal. The body must be able break this food down into tiny particles so they can be absorbed through the intestinal lining and into the bloodstream where the nutrients and calories are taken and used by the cells. The waste products of digestion and metabolism must be effectively removed through the kidneys, bowels, lymphatic system and skin. 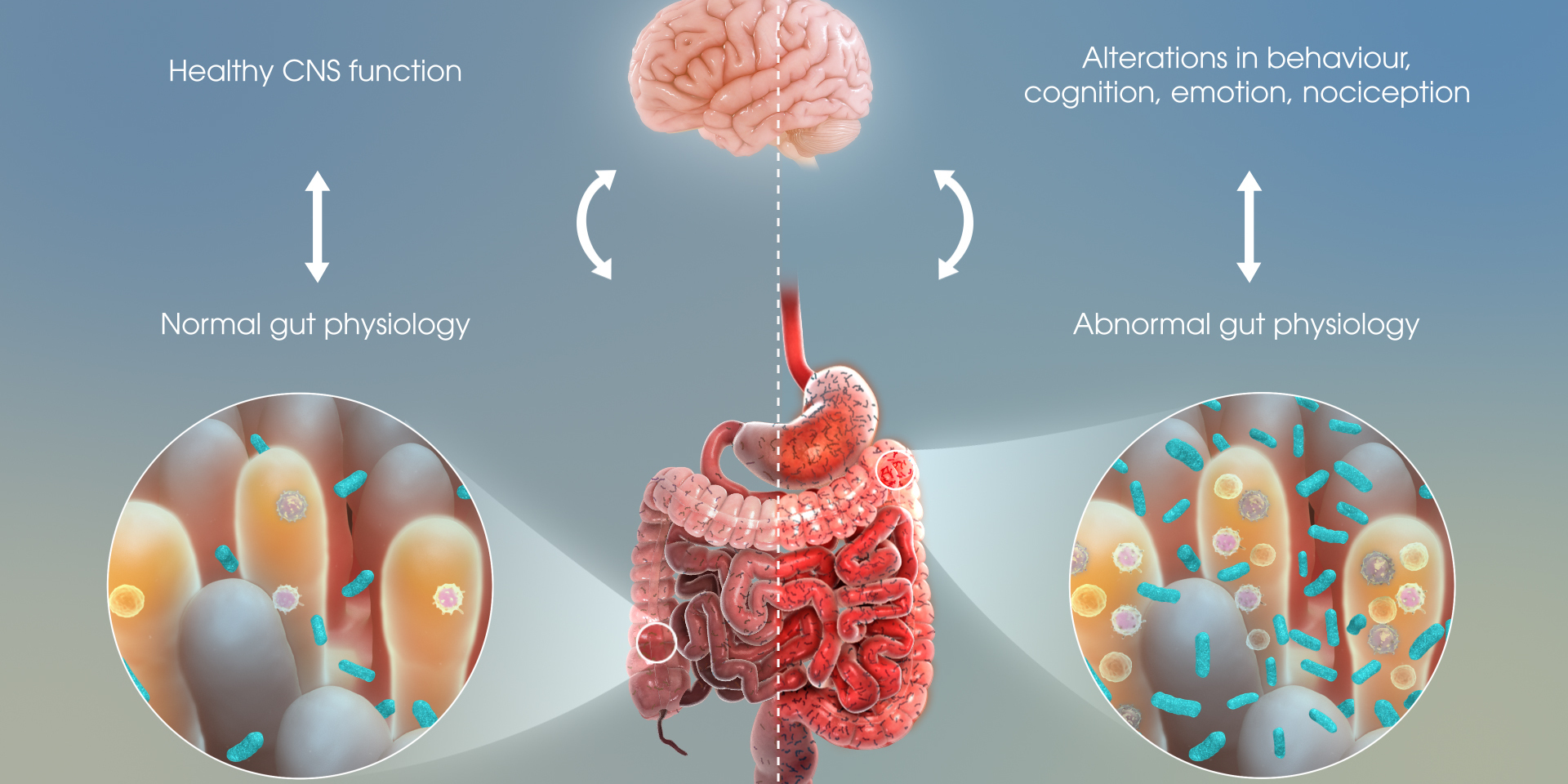 There are more bacteria in our intestinal tract than there are cells in our body. A total of 100 trillion bacteria live together in our digestive system, in either symbiotic or antagonistic relationships. Their total weight is about four pounds – equal to the size of the liver. The most important friendly bacteria are Lactobacillus acidophilus and Bifidobacterium bifidum. They have many functions and act like a symbiotic organ to protect our health. 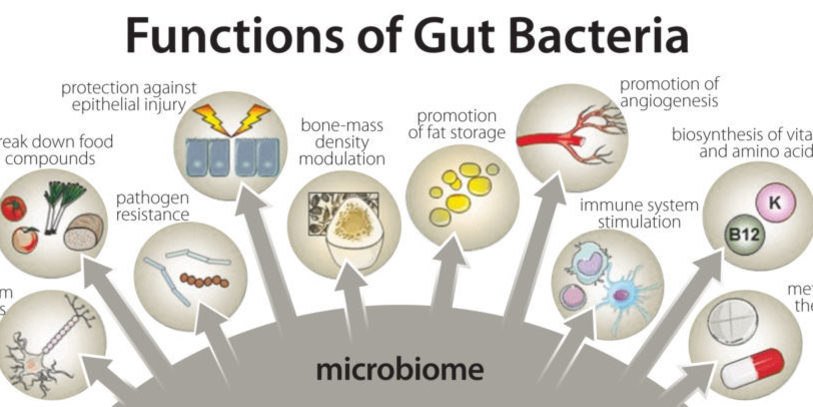 The functions of healthy intestinal flora

They produce acids that keep the pH balance of the intestine. This acid environment prevents disease-producing microbes from getting a foothold.
They prevent colonisation of the intestine by pathogenic bacteria and yeast by protecting the integrity of the intestinal lining.
Manufacture many vitamins including the B complex and vitamin K.
Increase the absorption of minerals such as calcium, magnesium, iron and manganese.
Increase resistance to food poisoning through their powerful antibiotic effect.
Prevent the overgrowth of disease-causing microbes, such as candida, helicobacteria pylori, E. coli and salmonella.
Prevent and treat antibiotic-induced diarrhoea.
Inhibit the growth of bacteria that produce nitrates in the bowel. Nitrates are bowel toxins that can cause cancer and reduced activity in bacterial enzymes associated with the formation of cancer-causing compounds in the gut.
Help to regulate peristalsis and bowel movement.
Help prevent the production and absorption of toxins produced which reduces toxic load to the liver.
Helps prevent urinary tract infection.
Contribute to improved immune function and protect against development of allergic conditions.

The factors that can alter the intestinal flora and cause dysbiosis

In the early 20th century Dr Eli Metchnikoff popularised the theory that disease begins in the digestive tract because of imbalance of intestinal bacteria. He called this state dysbiosis, which comes from symbiosis, meaning “living together in mutual harmony”, and dys, which means “not”. The common causes of altered intestinal flora and dysbiosis include:
Antibiotic use simultaneously kills both harmful and helpful bacteria throughout the body.
The use of anti-inflammatory medication, birth control pill and steroid drugs.
Psychological and physical stress.
Altered gastrointestinal peristalsis. When peristaltic action slows down a rapid overgrowth of harmful bacteria is probable.
The use of laxatives.
The use of antacids which encourage an alkaline environment and favours an overgrowth of harmful bacteria.
Poor dietary choices: high levels of poorly digested protein, especially animal protein, high sugar and refined carbohydrate, high processed fat and low fibre.
Undigested protein, as a result of its high consumption, can lead to an overgrowth of harmful bacteria. It has been estimated that as much a 12 grams of dietary protein per day can escape digestion in the upper GIT and reach the colon. This undigested protein is fermented by the harmful microflora, increasing its number and activity.

Maintaining or attaining a healthy colon is uncomplicated:
Use a good probiotic supplement to restore healthy flora.
Consume foods that stimulate the growth and activity of the healthy flora in the GIT. A form of natural prebiotic is obtained from the indigestible starch found in banana, onions, leeks, asparagus and Jerusalem artichokes. Increase fibre intake.
Reduce the intake of refined carbohydrates and sugar and processed fats.
Maintain good levels of omega 3 fatty acids.
Reduce levels of wheat and gluten.
Drink adequate levels of water.
Colon hydrotherapy is a gentle procedure in which water is flushed through the colon. It promotes good gut function and digestive health and can be used to treat gut related issues such as constipation, difficult bowel movement and bloating.
Colon hydrotherapy helps to flush out waste material, fecal matter, gas, harmful bacteria and yeast fungi, havng a healing effect on the digestive tract.

In order to benefit, products that contain Lactobacillus acidophilus and Bifidobacterium bifidum must provide these organisms in a manner in which they can survive. Typically a high-quality commercial preparation (probiotic supplement) produces greater colonisation than eating yoghurt. Yoghurt is usually made with Lactobacillus bulgaricus or Streptococcus themophilus. While these two bacteria are beneficial and possess some health benefits, they are transient visitors to the GIT and do not colonise the colon.
Proper manufacturing, packaging, storing of the product with the correct amount of moisture and freedom from contamination and the need for refrigeration is also necessary to provide maximum benefit. Some yogurts are pasteurised; this process destroys both harmful and beneficial bacteria. When fruit is added to yoghurts, the culturing agents nibble on the fruit sugars rather than ferment the milk. Chemical additives are added to fruit yoghurts to prevent the live bacteria coming into contact with the fruit sugars. The fruit added to commercialised yoghurt is processed. Many commercial types of yoghurt contain refined sugars, additives and preservatives.

Changes in food habits during the past 100 years include:

The consumption of over 100lb of refined sugar per individual per year.
The 10-fold increase in sodium consumption.
The four-fold increase in the consumption of processed fat.
A much-reduced consumption of vegetables, fibre and minerals such as potassium, magnesium, calcium, vitamins and antioxidants.
An increase in additives and preservatives.
To conclude, proper digestion is essential for optimum health. Incomplete or disordered digestion can be a major contributor to the development of many diseases. Good health begins within and particularly within the colon. Without proper elimination of waste products there are serious repercussions to our health. Maintaining or attaining a healthy colon is straightforward: eat a nutrient rich diet that is high in fibre, drink water and maintain the health-promoting microflora and take appropriate actions when there are problems.
Some useful links:
Bloating: Getting Rid Of Your Food Baby With Functional Medicine: https://drhyman.com/blog/2021/10/15/podcast-hc433/
Fix Your Allergies By Fixing Your Gut And Changing Your Diet: https://drhyman.com/blog/2021/08/27/podcast-hc71/
All About The Microbiome: https://www.optibacprobiotics.com/uk/learning-lab/in-depth/gut-health/microbiome-all-you-need-to-know
We hope you enjoyed this blog which is available as a free download. If you are looking for more information regarding gut health and colonic hydrotherapy please dont hesitate to get in touch.
Free Download
Tagged as: colonic hydrotherapy, gut health
Share this post: